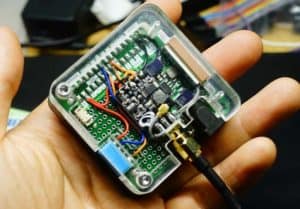 After working on my garage door opener for a bit, I’m not attempting to add Infrared support to it so that it can be able to control devices such as tv’s or for example Mrs. Kuehl’s projector. I am hoping that the ESP32 api adds support for infrared natively soon so that I can accomplish this without having to bitbang a protocol because that always ends up being a really ghetto solution. I also am hoping to add a little better of a way to control devices over the internet because as of right now it requires a messy solution of port fowarding your router which I doubt many people know how to do that.

I am thinking of making a sort of polling mechanism in which the devices will poll a server for their status rather than receiving it as a GET request. This will increase security since then not just anyone will be able to access it. After I implement that I can also implement a login system which would allow you to send access to someone or do things like one time use links. This way you could let a friend open your garage, but only once for example to feed a pet while you are on vacation. As of now I have not had further contact with my mentors but I do not have any questions for them so that is OK for now. I am still running smoothly with only a few delays because I have been programming senior assassins. This is mostly done though because I have finished the bulk of that PHP class now. I shouldn’t have more delays as now Cross country season is also almost done which was another major time consumer for me. I have ordered parts for some more prototypes and will try and make a more elegant solution for the garage door opener receiver end.

Comments Are Not Yet Implemented.