Early in 2020, Segway released a new version of the Ninebot Max/G30 motor that was able to go faster at the expense of lower torque.

Identifying which gen motor you have is fairly straightforward.

Motors beginning with a serial number of ‘5’ or ‘6’ are the older generation or “Gen 1”.

So what’s the difference between a Gen 1 motor and a Gen 2 motor?

These are their max speeds without hardware modifications, no amount of custom firmware will get your max/G30 to go faster than these speeds.

*Note this was done on an SNSC (rental) version of the G30. You may have more or fewer screws depending on your specific model.

The bottom cover is held in place by 18 Torx Security T15 screws. They may be stripped or ground down if your scooter shows signs of wear.

From here, on each side of the rear wheel are two M2.5/2.5mm Allen/hex screws that need to be removed.

You can attempt to peel back the reflector stickers if you don’t want to replace them but it is much easier to puncture them and replace them later. 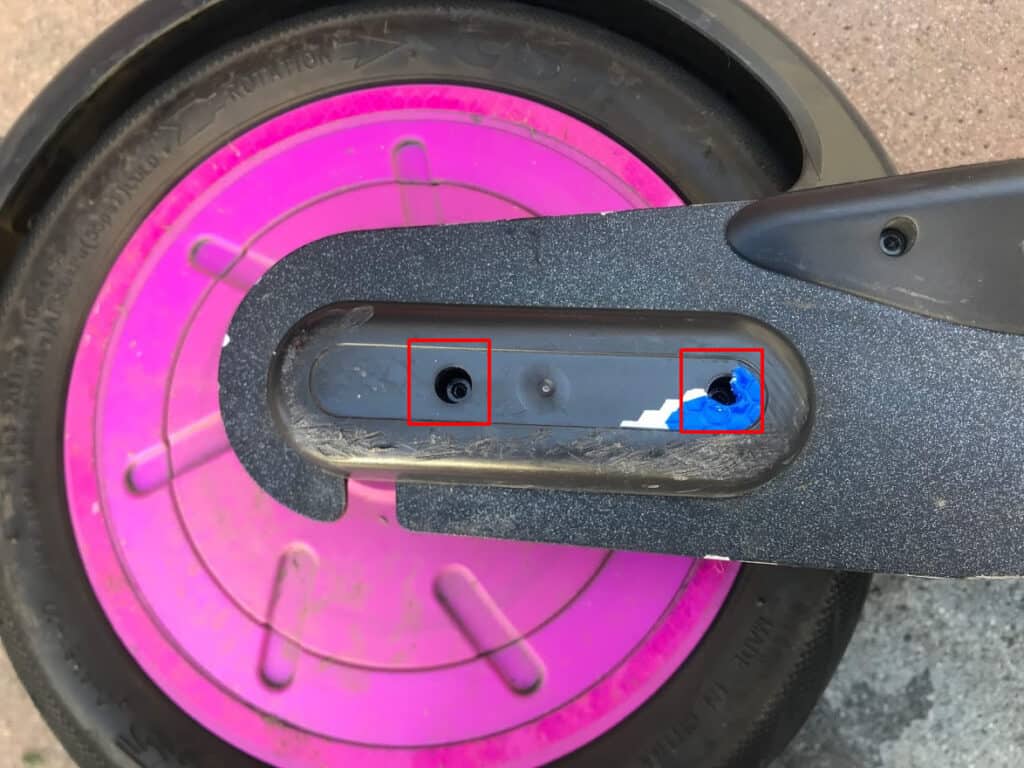 The 2 bolt guard screws are located behind the reflective stickers.

Removing the Bolt guard on both sides will reveal the two bolts.

Remove them with an adjustable wrench.

This will likely take a fair amount of torque, especially if you’ve never removed the wheel before. 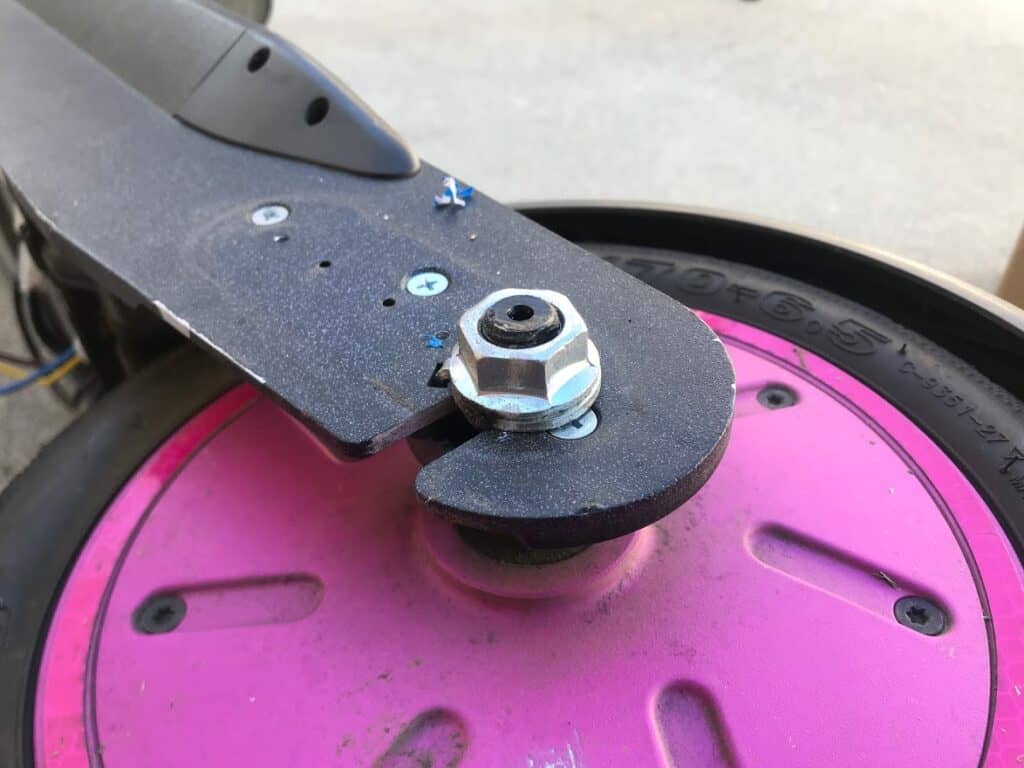 Remove both bolts before continuing.

Remove the aluminum locking piece from the axle.

It may take a bit of force but it is not held in place by anything. 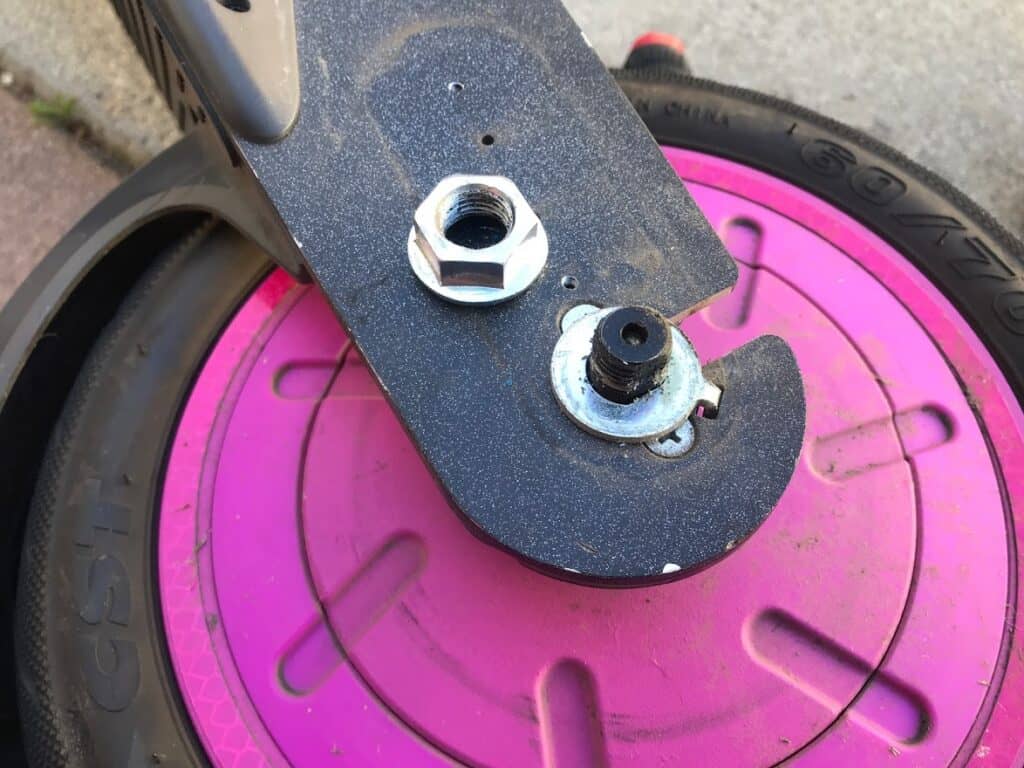 The Locking piece in place.

Once the bolts are removed, the two upper screws holding the motor wire guard in place can be removed.

These are not present in retail/folding versions of the scooter. 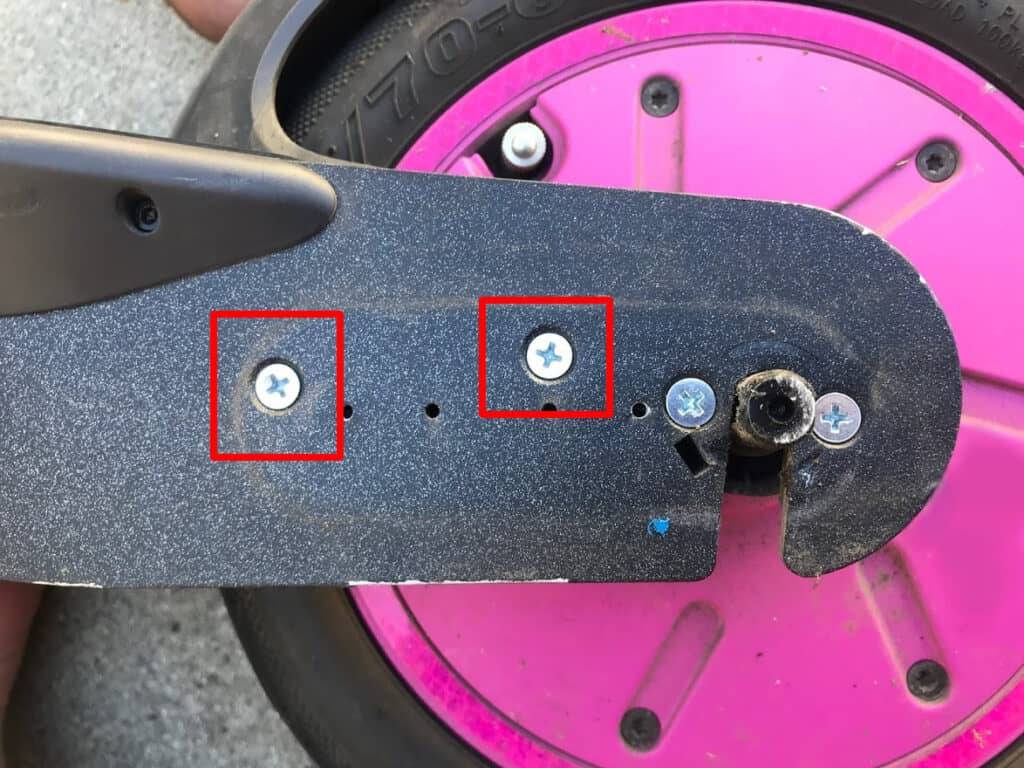 From here, 4 black Security Torx T25 screws hold in another plastic wireguard at the rear of the motor. 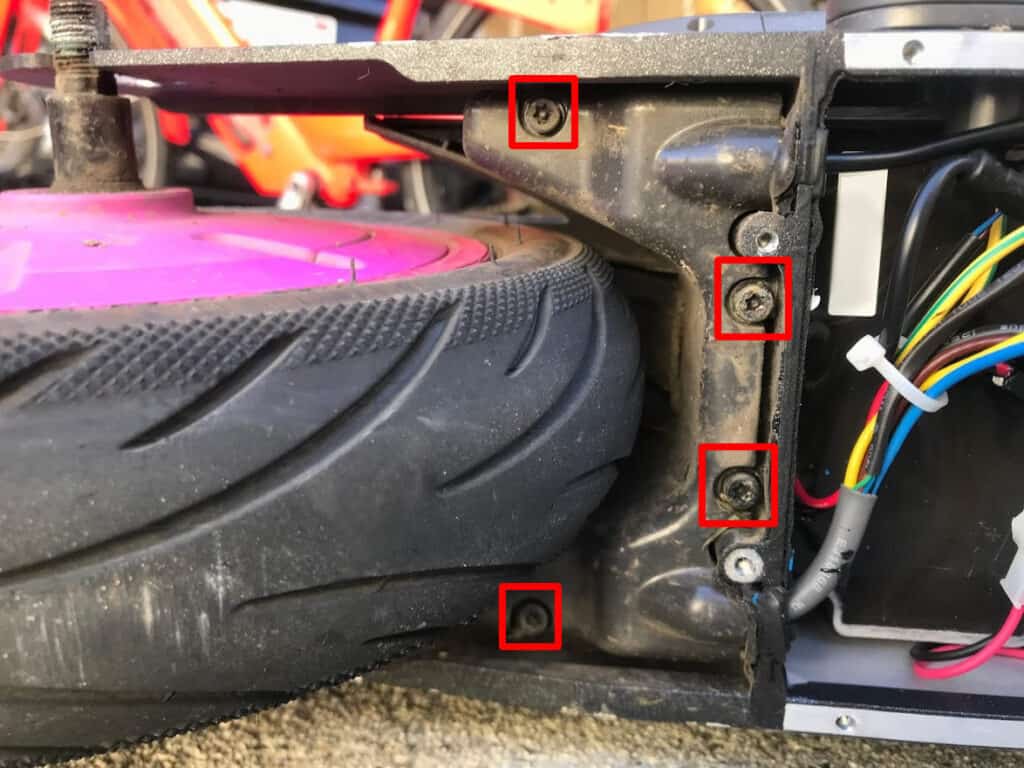 Once you remove this cover, it’s time to remove the ESC/Motor Controller. 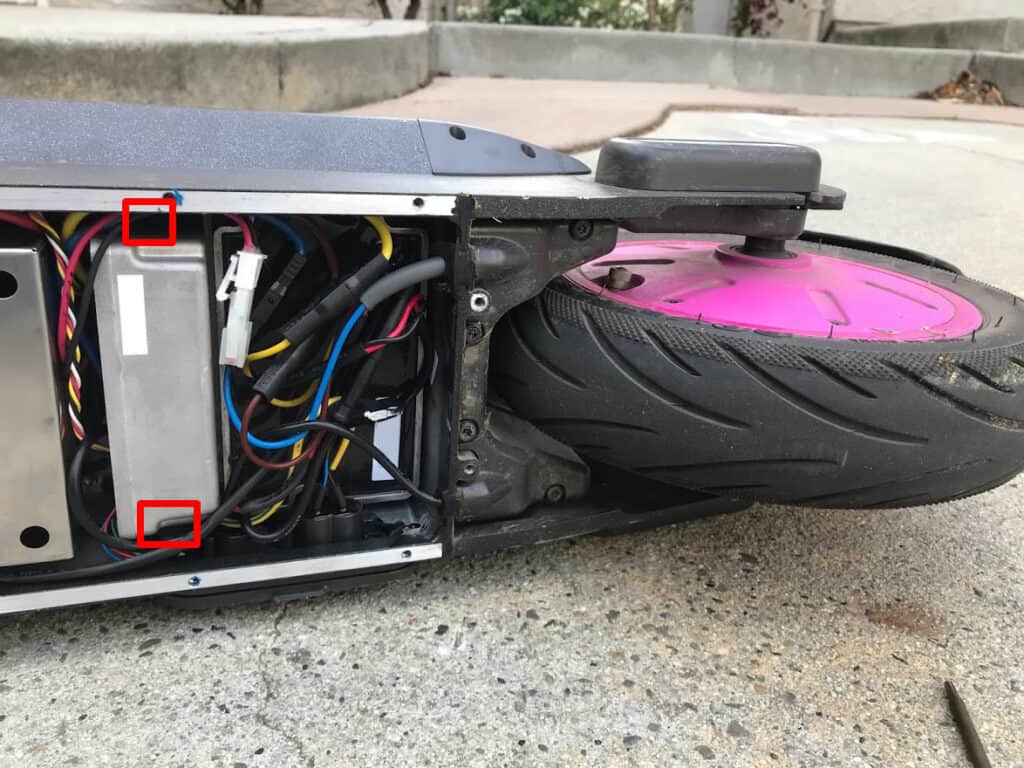 The location of the ESC screws.

Carefully unplug the 5 pin motor hall sensor wire from the ESC, as well as the 3 thick phase cables. 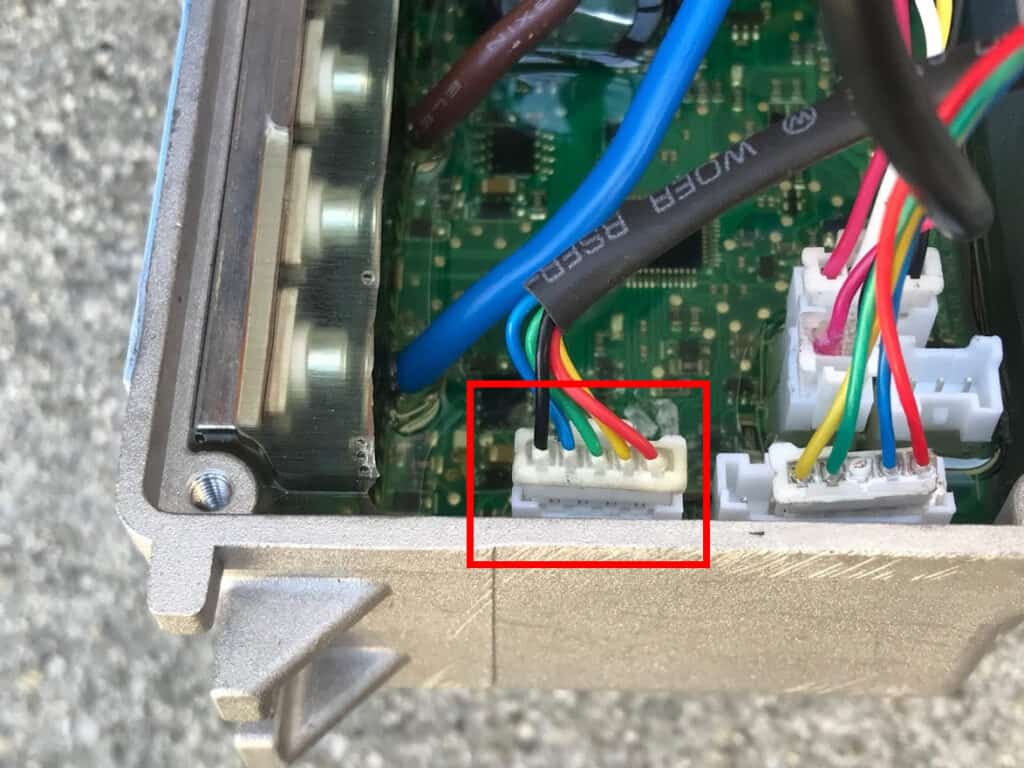 The location of the Hall sensor cable.

Remove the old motor by threading the hall sensor cable and three-phase cables back through the hold in the rear motor area.

Remove the wire guard from the old motor and snap out the plastic insert out of your old motor if your new motor does not come with one. 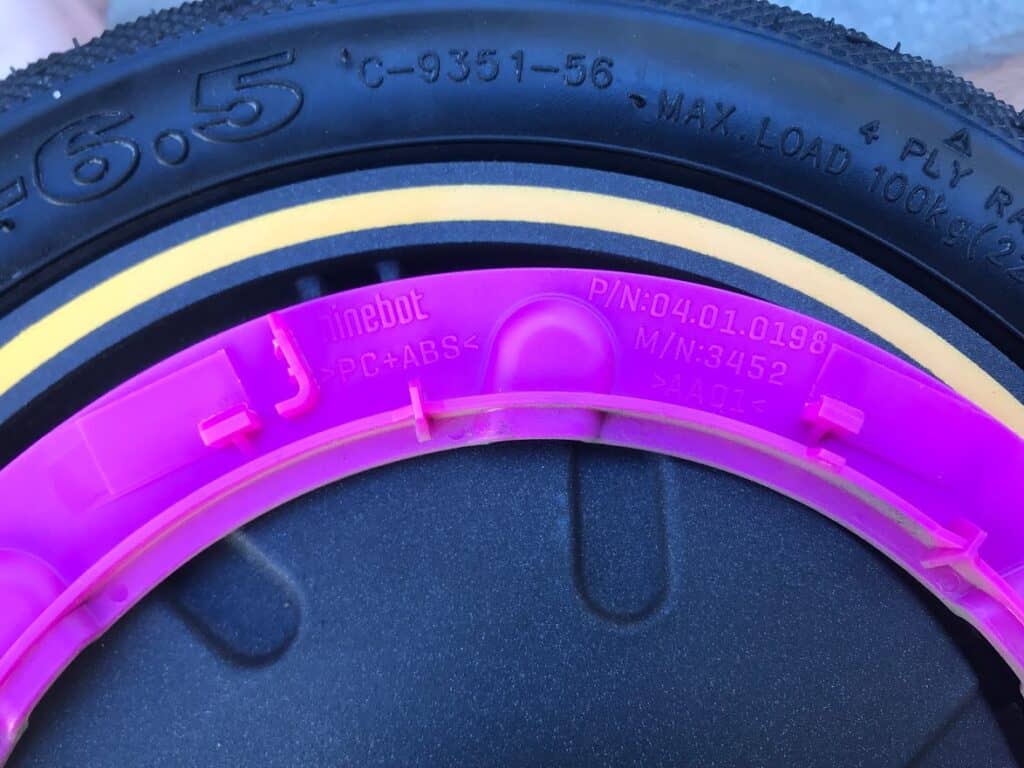 Thread the wire guard through the wires and place it on the new motor. 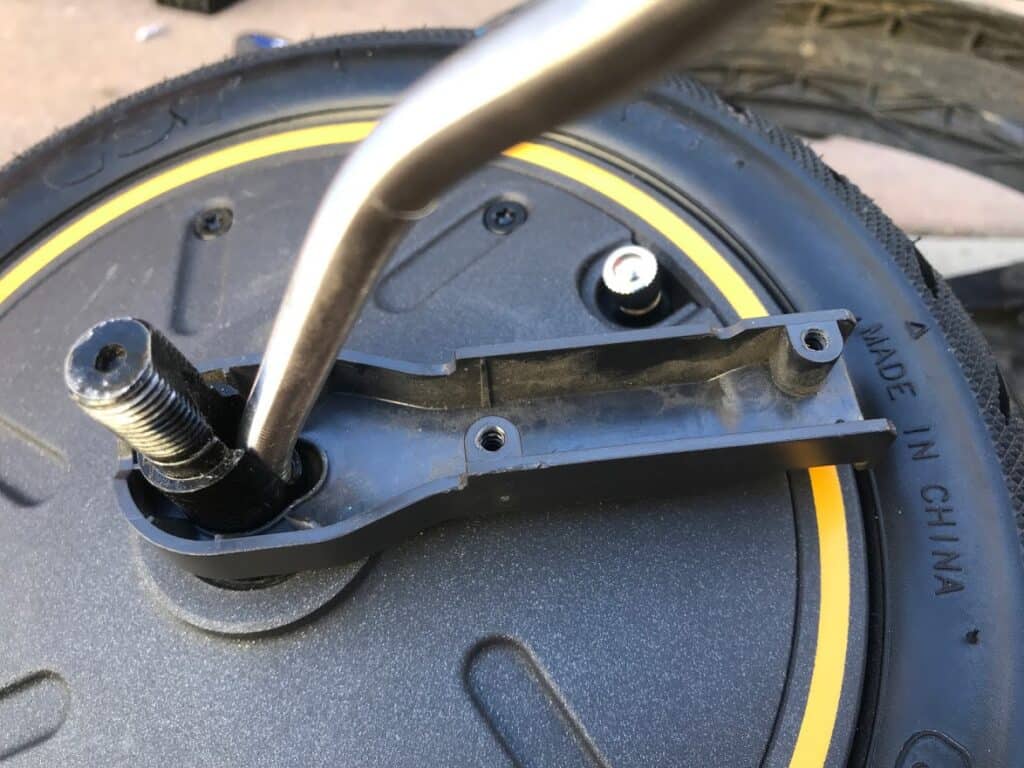 This wire guard is not present on some models, if you do not have one, don’t worry.

Thread the wires through the hole in the motor area and set the rubber grommet in place. 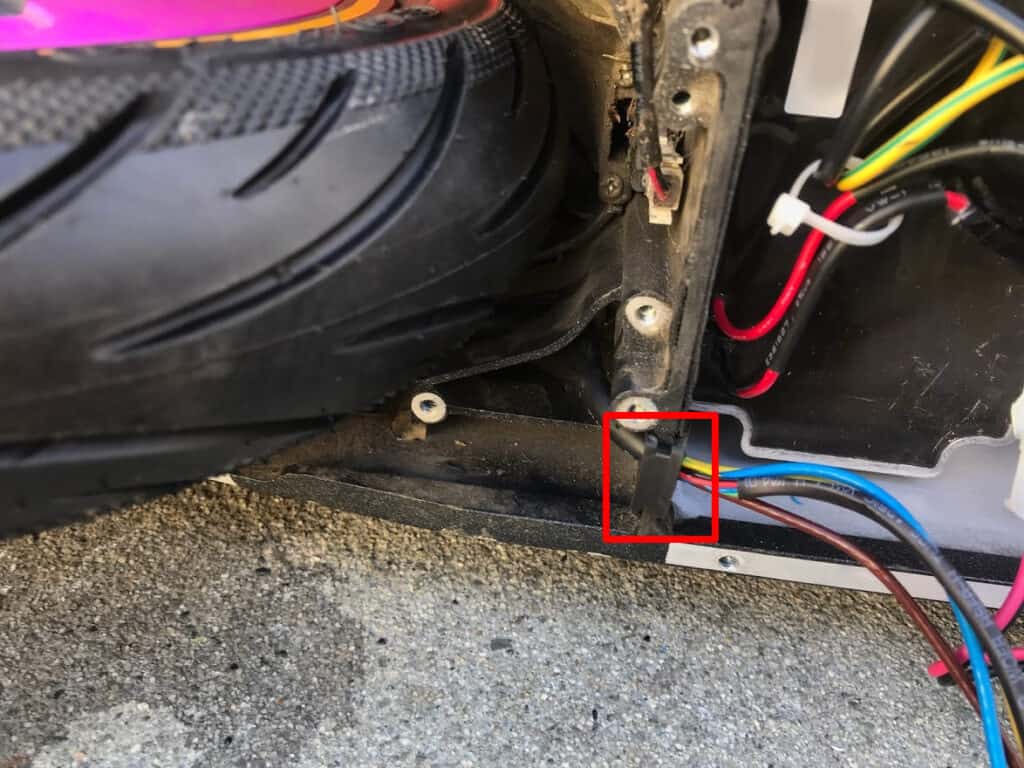 Make sure this grommet is firmly in place.

Plug the 5 pin hall sensor cable back into the motor controller/ESC and then screw it back into place using the two M3 hex screws.

Push the wire guard into place and replace the two Phillips screws you removed earlier.

Push the bottom mudguard into place and replace the black Torx T25 screws. 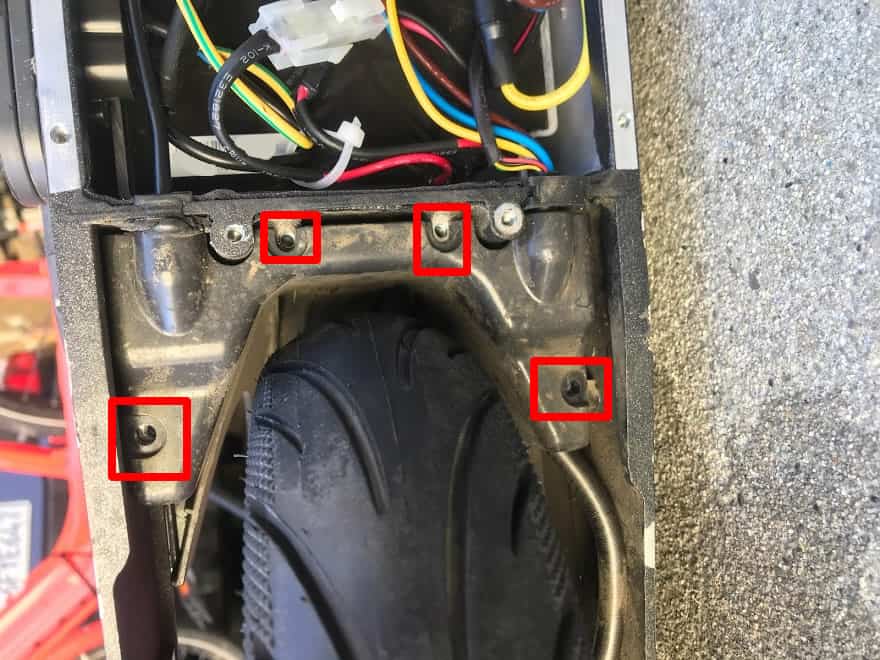 The location where the screws should be replaced.

Place the aluminum lock piece back on the hub and lightly thumb tighten the bolt on both sides.

Do this for both sides, and then finger tighten the bolts on.

Once both bolts are somewhat tight, use an adjustable wrench to tighten them until they don’t spin anymore.

At this point, it would be wise to check everything powers up and do a quick free-wheel spin test.

If the test succeeds, continue by replacing the bottom plastic cover with its 18 screws.