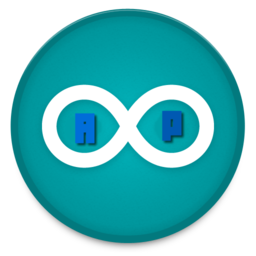 My logo, suspiciously similar to the arduino logo...

ArduinoPlays was a YouTube channel that I made that uploaded piano/Arduino covers of songs, primarily videogame music(VGM).

A screenshot from January 2018 showing my dashboard.

I started ArduinoPlays with the idea that I would convert midis and play them using the PlayTune library by LenShustek.

This began shortly after my 14th birthday, in April of 2014.

I mostly found midis off freemidi.org and other random sources via google and would just convert and film them as I had time.

After making about 10 covers and amassing a grand total of like 200 views I started running into an issue:

I found a channel that made medleys of geometry dash songs called Tectic (videos have since been deleted but the channel remains up). I credit this channel entirely with my foray into music.

His covers were much better than the others and a level of creative freedom was taken with them that made them fun to listen to.

I downloaded a few of his midis and played them in a piano visualizing program I had bootlegged called Synthesia.

At this point, I decided to film the output and upload it to youtube for those who couldn't read sheet music (like me) in case they wanted to learn how to play these tracks on the piano visually. In several places on his channel, Tectic mentioned he used a software called NoteWorthy Composer.

Once I bootlegged a copy of this it was over. I began work on my first-ever cover of a song, Base After Base by DJVI. It took me a while to get the hang of the software and I just kept listening to the song on youtube for 5 seconds and then trying to copy what I heard and then listening again to see if it sounded right.

As soon as I posted, it began getting more views than my previous videos and many people asked if I would cover other songs from Geometry Dash. This lead to me seeking out more midi files to play in synthesis and, as time permitted, making my own.

As time went on I stopped posting others' files and began exclusively making my own, aiming to get 1-2 posted a month.

One of the main reasons I was even aware of the piano visualizing program I used to make my videos (Sythesia) was because of the "Black Midi" community.

A primary player in that scene is an account known as Gingeas.

I had been subscribed to Gingeas for a while before he had hit 10k and decided to try my luck at a giveaway video for FL Studio he had posted.

Somehow I ended up being chosen and because of that video I was able to move to a legit copy of FL studio and could update to the latest version.

Attempts to Figure Out What Happened

Recently talk of so-called "alternative media" has been heating up with accusations of censorship for political reasons.

Unfortunately, I was an early adopter of attempting to find an alternative platform to host my content due to my suspension from YouTube.