Ninebot Max How to Downgrade/Flash Back to Stock Firmware

Occasionally you may accidentally proceed with the firmware update in the segway-ninebot app and end up with a feature you liked removed, or a lower top speed.

Though the ninebot app doesn’t officially support downgrading firmware, there are ways around this limitation.

This guide details how to Flash the original/OEM/Stock firmware back to a NInebot G30/SNSC 2.0+ scooter.

Use the links below to easily navigate to your preferred app/os: 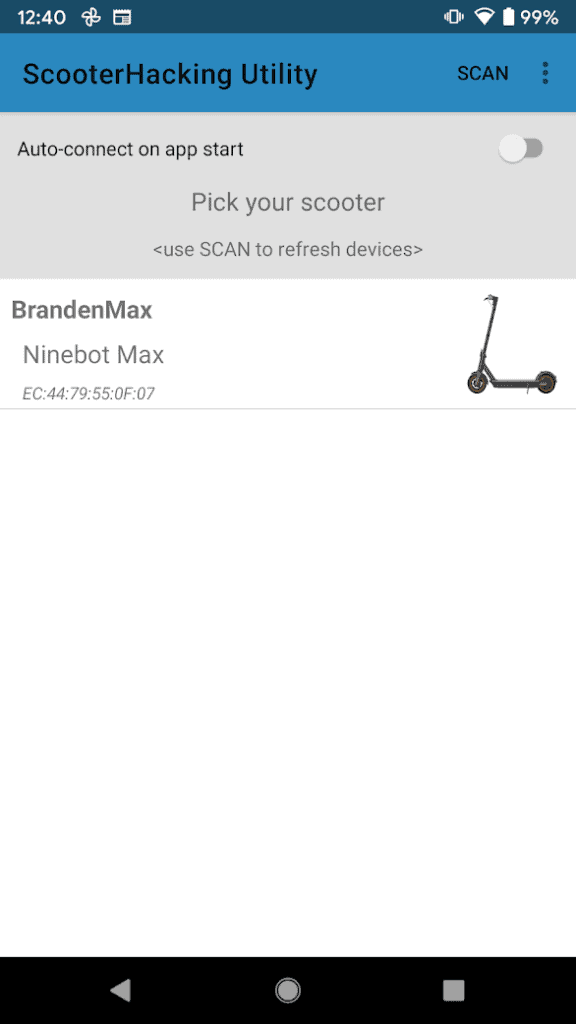 Make sure that the app has successfully connected and doesn’t show “0.0.0” for the version numbers as shown below. 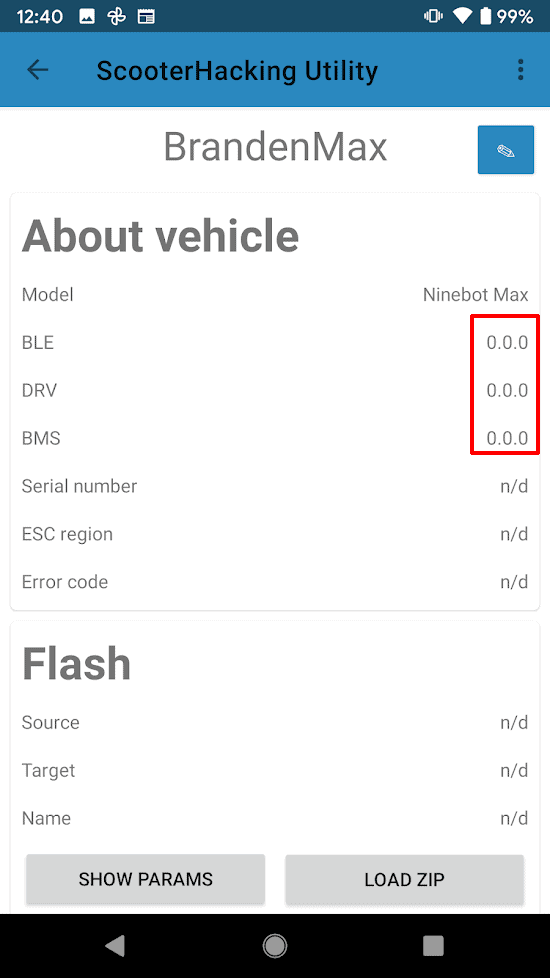 Version numbers that are all zeroes are indicative of a failed connection.

If the version numbers are shown and the connection was successful, scroll down to the “Flash” section and click “Load Original”. 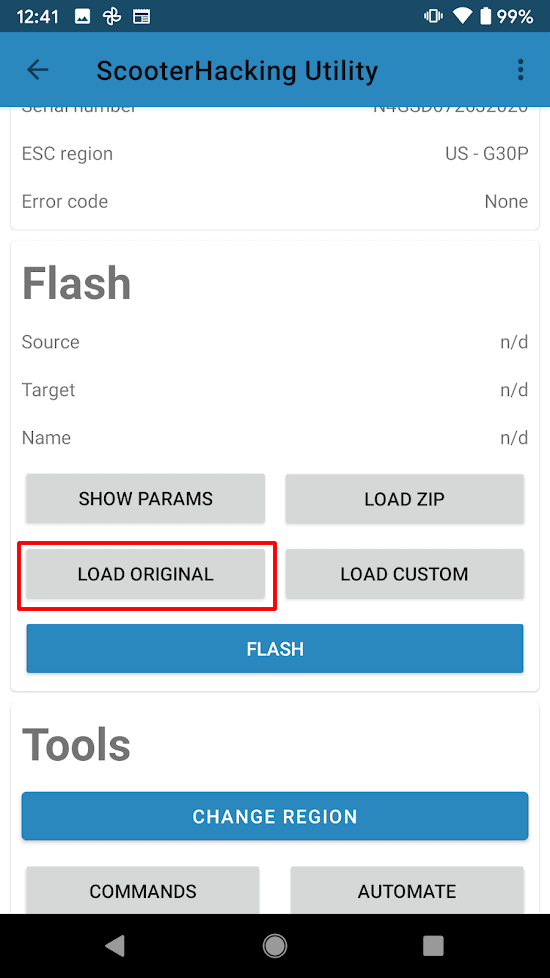 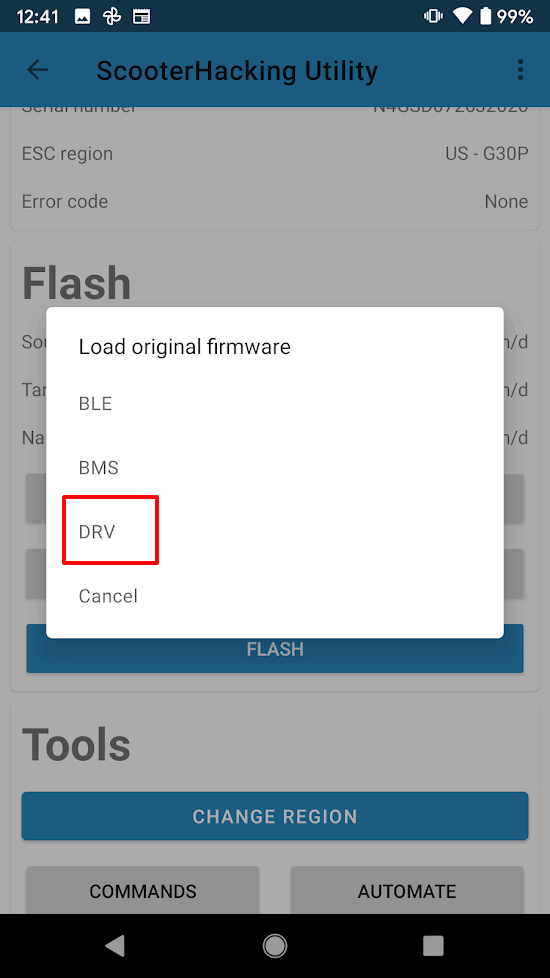 In the list of version options, I usually use DRV126 as I trust it to be stable and not have issues. 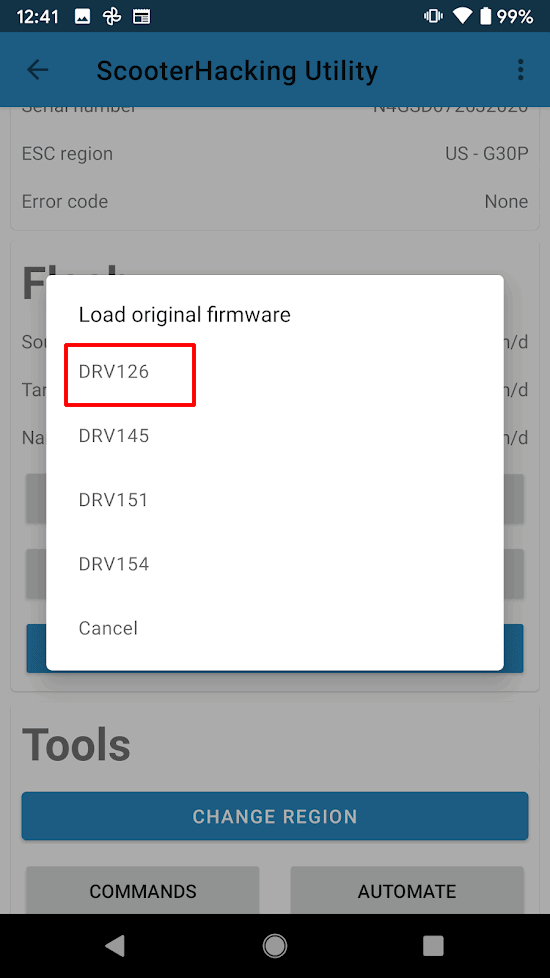 You can choose any of the ones you want but in general, choose 1.2.6 or the latest version available.

Lastly, click the “Flash” button and allow the process to complete while waiting near the scooter.

Click “Flash” and you should be good to go once it’s done.

XiaoFlasher is an android app that can be used to flash and configure many models of scooters on the go.

This app is full of ads and it is much more recommended to use ScooterHacking Utility as shown above.

Open Xiaoflasher and scan for devices. 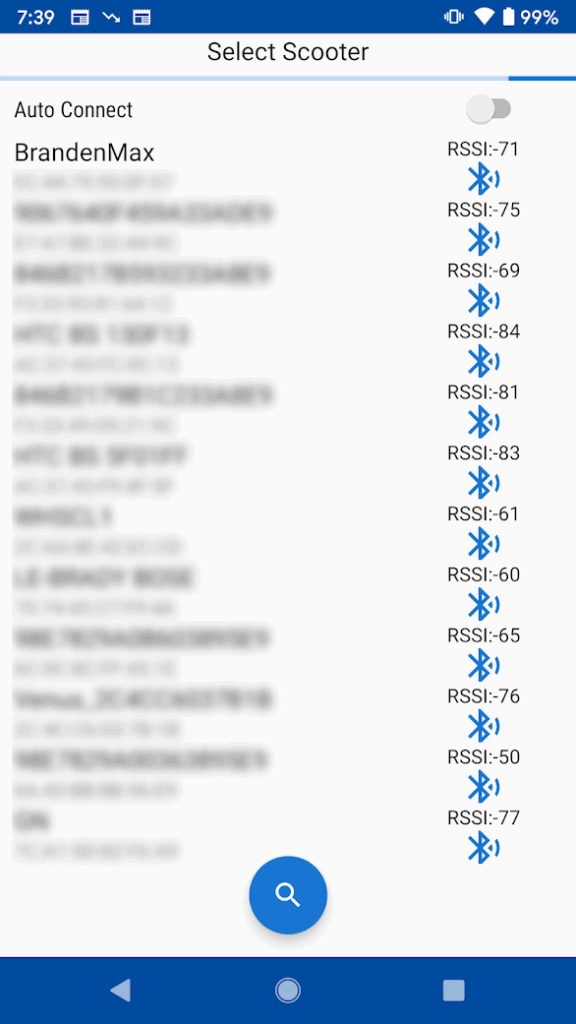 When XiaoFlasher annoys you to rate the app, press “No, Thank You”. 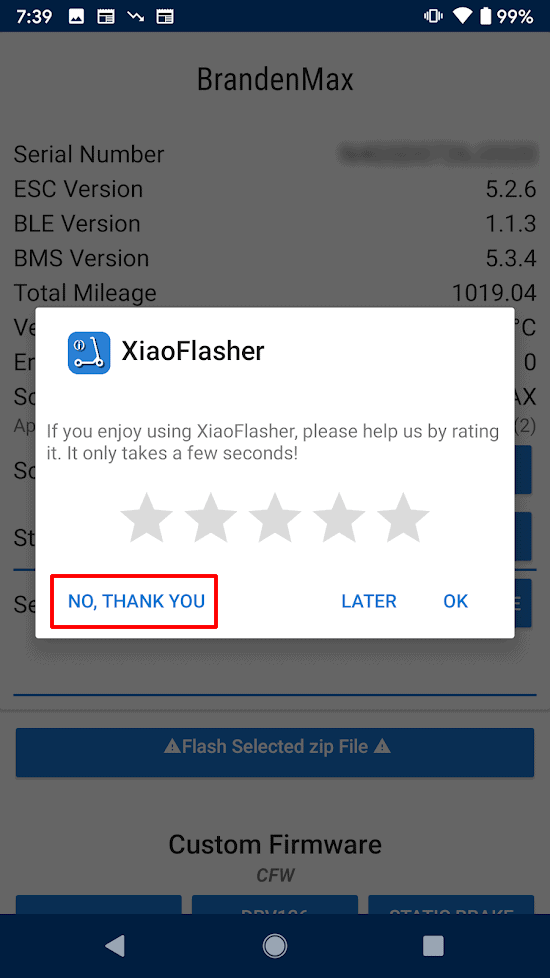 Leave a low review if the app annoys you or just ignore the prompt all together by clicking “No, Thank You”.

Confirm that version numbers are shown indicating a successful connection. 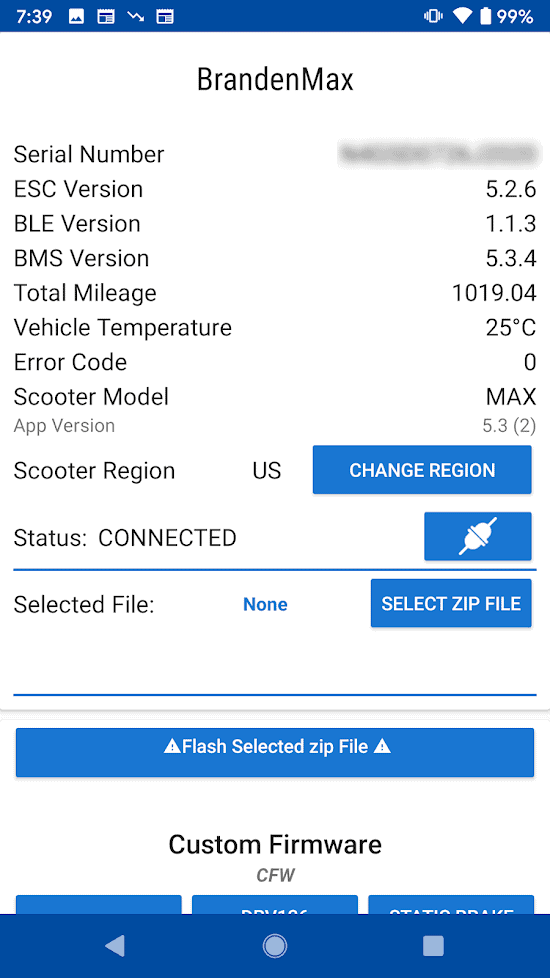 If there are no version numbers, click the button next to “Status: DISCONNECTED” to attempt to reconnect.

If the connection was successful, scroll down to “Default – Official Firmware” and click on “DRV126 MAX”. 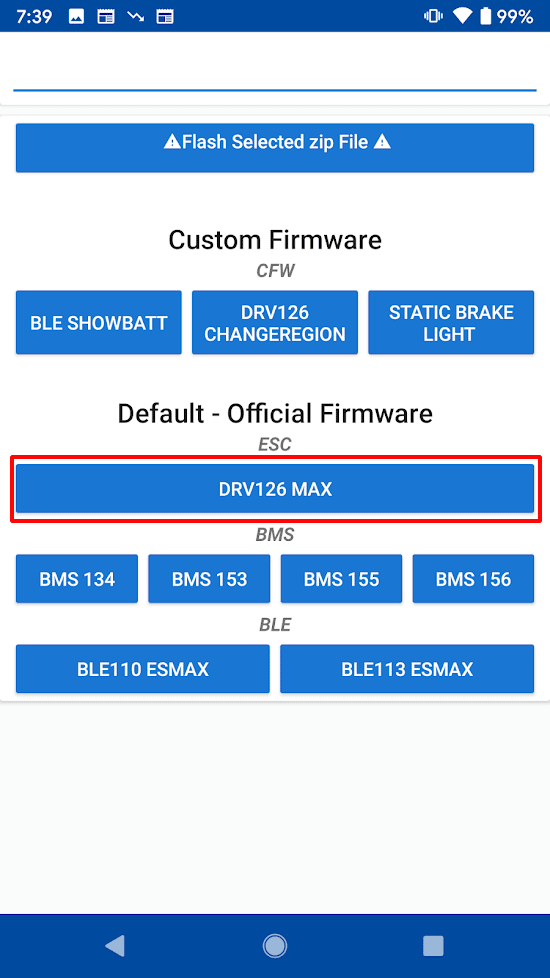 The available version numbers for ESC/DRV, BMS, and BLE.

Next, the file should be loaded.

Click on the button that says “Flash selected zip file”. 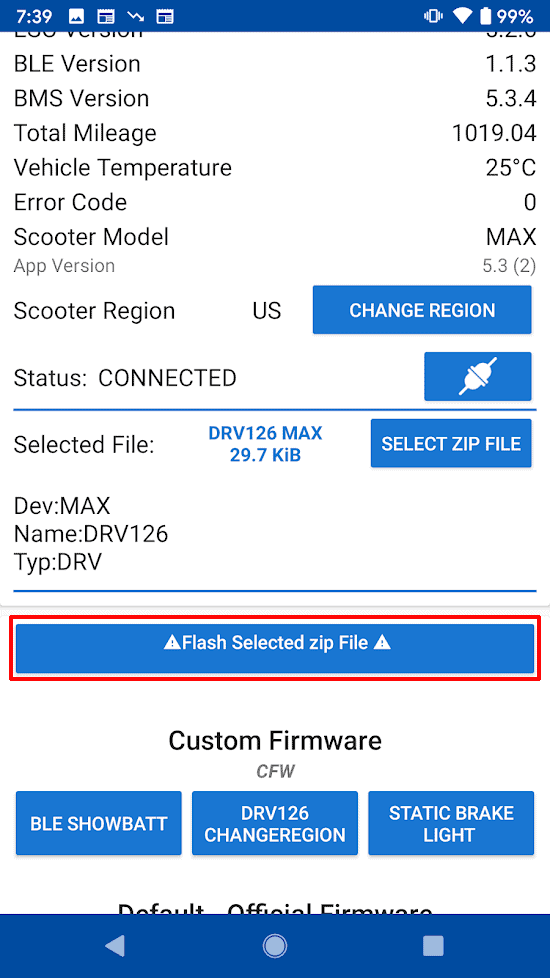 The firmware loaded and ready to flash.

Next, click on “I don’t want to contribute” and reconsider using XiaoFlasher for one of the free apps that perform better anyway. 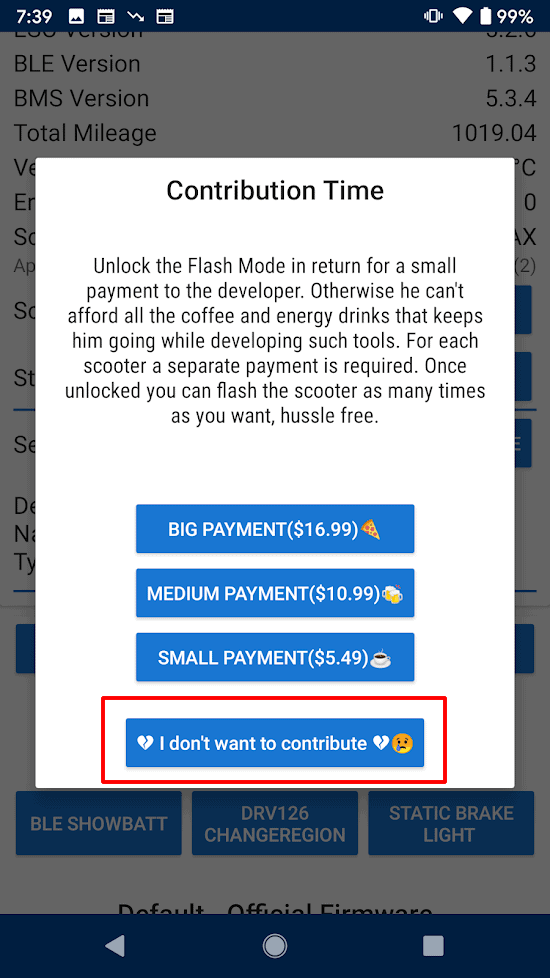 XiaoFlasher’s dev is known for using frowned upon practices such as firmware locks and ad spam.

Once you get past the donation spam, the flashing will begin, and after it finishes the version numbers should be changed. 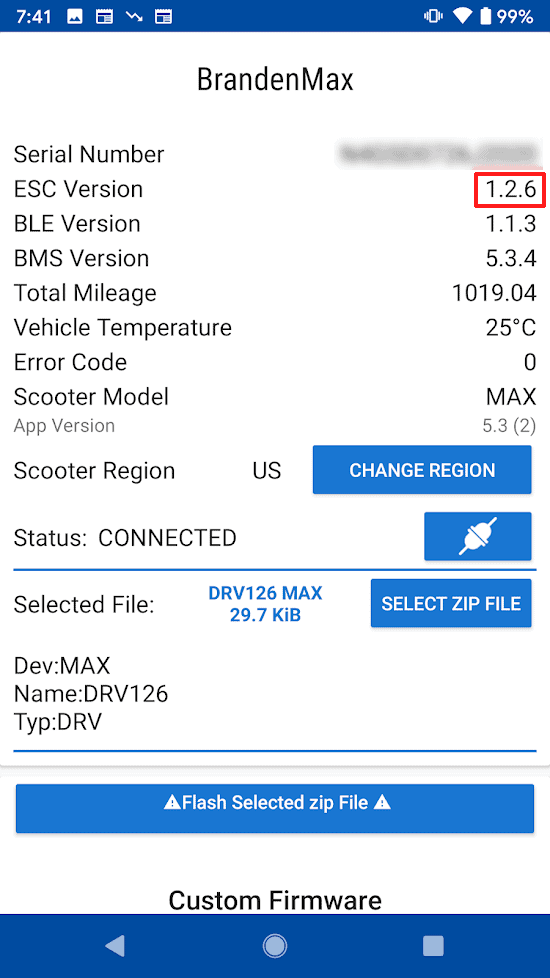 There are two main apps that allow the flashing of firmware to a Ninebot max: Ninebot IAP, and Ninebot Flasher.

Ninebot IAP is a tool developed by ScooterHacking.

Below is how to use Ninebot IAP to downgrade/flash stock firmware for the Ninebot Max series of scooters. 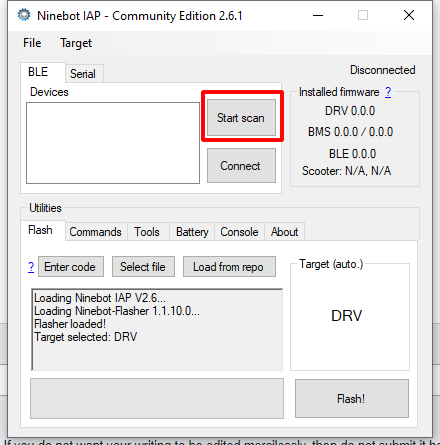 Once IAP finds your device, select it and press “Connect”. 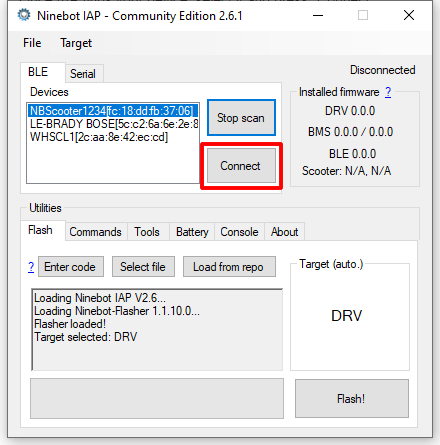 IAP will likely prompt you to “Press the power button to pair” if you are not on BLE 5.5.5.

If it does, press the power/headlight button once and wait for it to pair successfully.

The prompt for encrypted BLE. 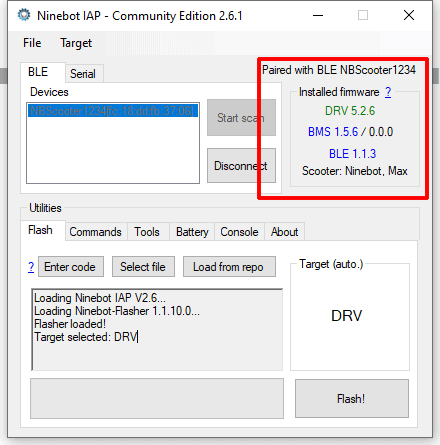 From here, press “Load From Repo” to load the stock firmware files. 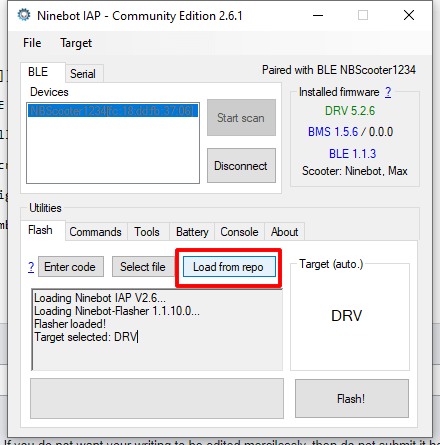 After that, select “DRV” from the dropdown.

Then, select your version. I personally use 1.2.6 mostly as it is proven to be reliable. 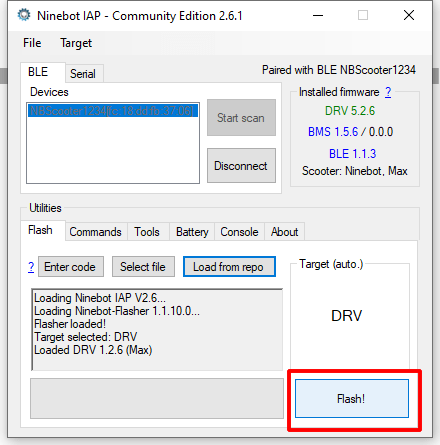 The file is ready to be flashed.

After it begins flashing, you will hear it beep once, and then the progress bar will begin to go up after a few seconds.

Ninebot Flasher is an app available on the Windows store.

Below is how to use Ninebot Flasher to downgrade firmware for the Ninebot ESX series of scooters.

Once installed press “Start Scan” and select your scooter from the list of options. 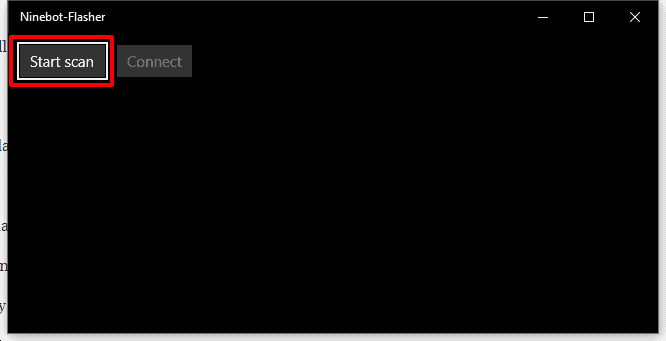 The startup screen for Ninebot Flasher.

If no options come up, you may not have BLE support on your device.

Once it finds your device, click on it and press “Connect”. 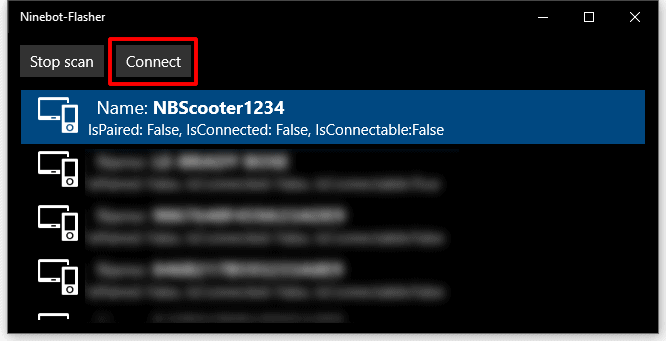 Ninebot flasher may kick you back to the connect screen while trying to connect, in which case just press connect again.

Once it connects, it may prompt you to “Press the power button to pair”. 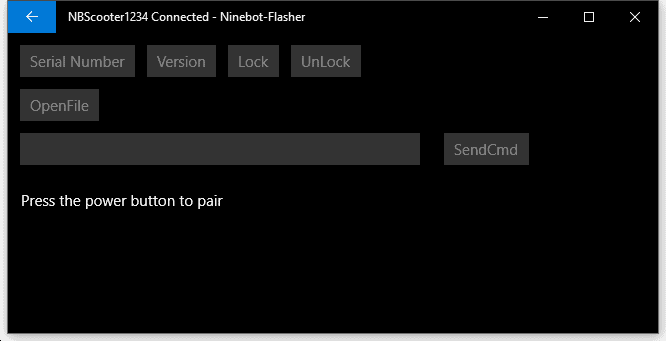 After that, it should show you your serial number indicating a successful pairing. 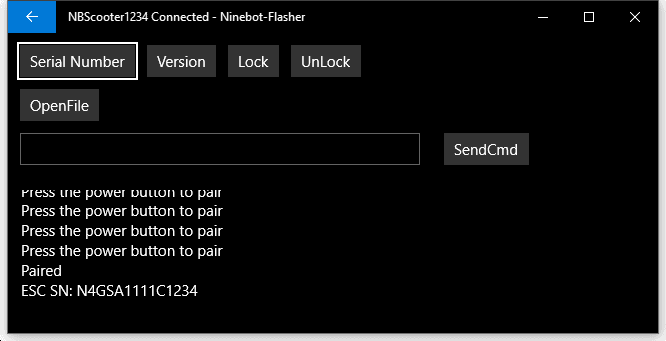 It will show you your SN to indicate a successful pairing.

It will show you your SN to indicate a successful pairing.

Download the firmware you want from the ScooterHacking DRV repo in .bin.enc format.

Click “OpenFile” and select the stock firmware file you wish to flash. 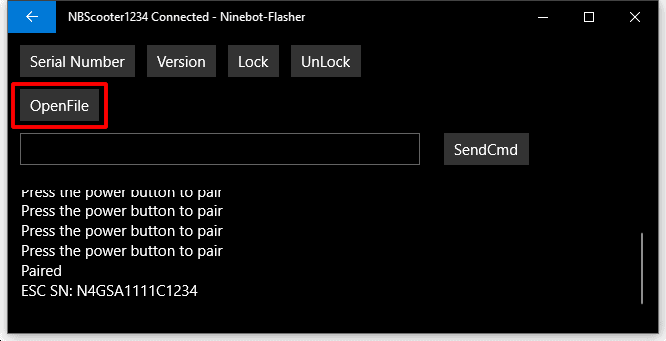 Press OpenFile and navigate to where you downloaded the .bin.enc file.

Press OpenFile and navigate to where you downloaded the .bin.enc file.

Once it loads and tells you the correct version number, press “Flash”. 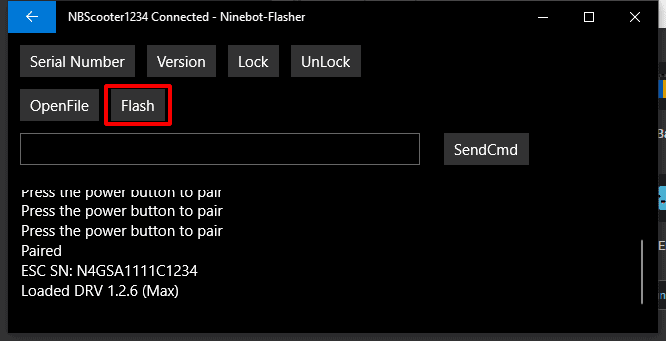 If you downloaded the right file it should tell you the version number.

If you downloaded the right file it should tell you the version number.

It may give some errors about page write failed but as long as it gets to 100% it should be fine.

There is currently only 1 app able to flash CFW/Firmware to ninebot scooters on iOS.

Scooter Companion is a beta app that is currently only available on testflight.

To flash back to stock firmware on iOS, you will need to install it. This is currently the only way to flash Ninebot Firmware on iOS.

I prefer to use DRV126.zip because it doesn’t cause issues.

Once installed, open the app and select the device you want to flash to stock. 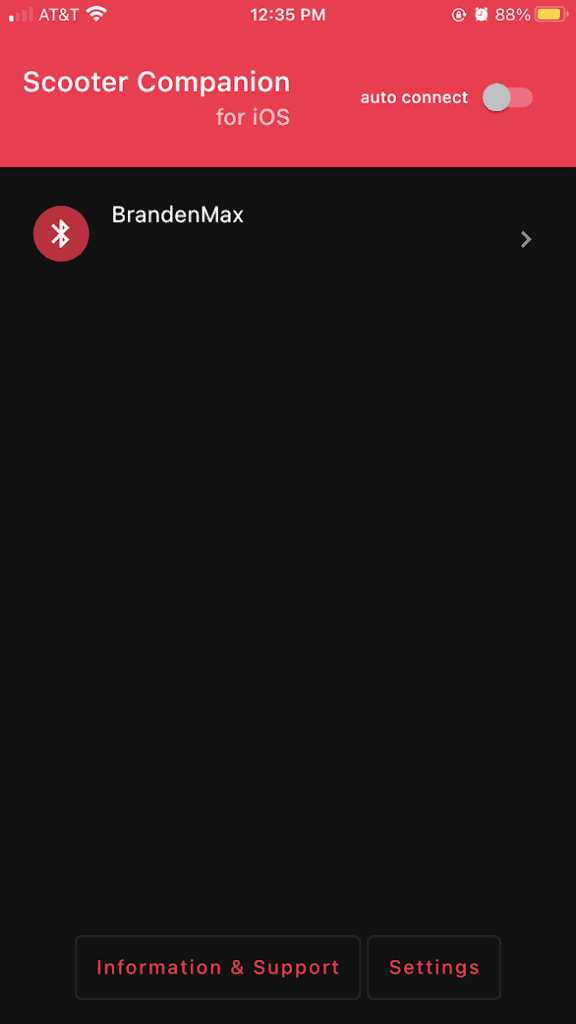 The scan menu for a Ninebot Max on Scooter Companion.

Next, open the “Firmware” menu on the upper right-hand side. 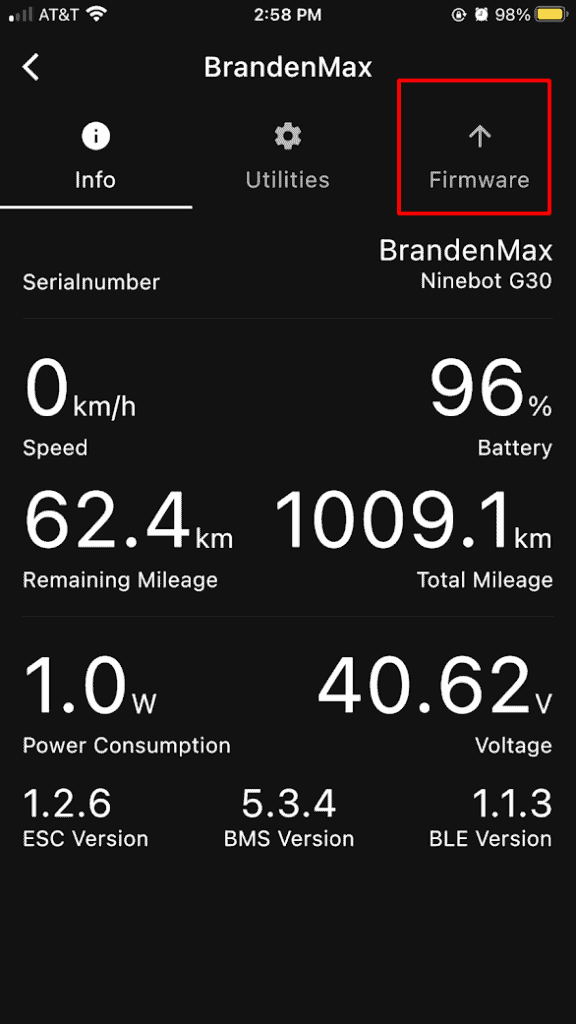 The firmware screen on scooter companion. 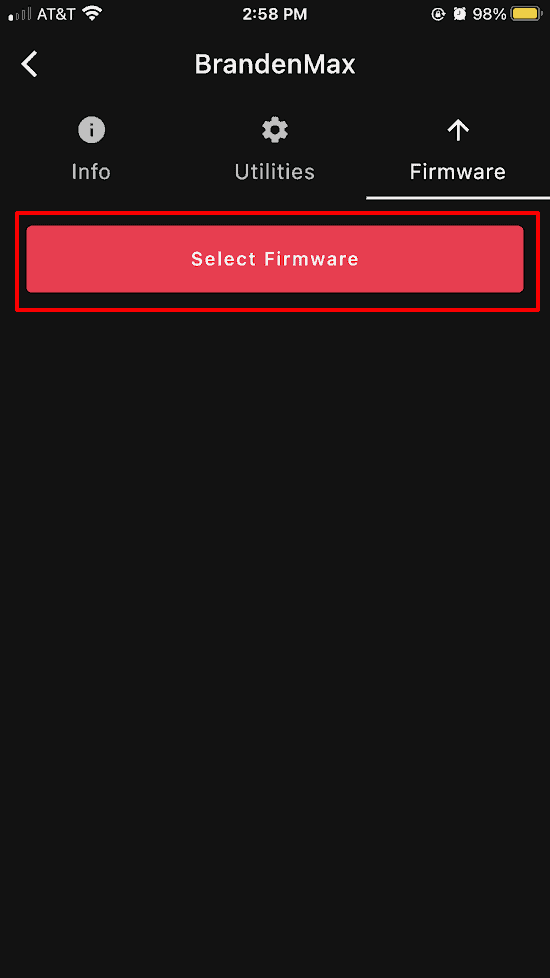 The firmware screen in Scooter Companion.

After that, select the zip file you want to flash (DRV126.zip for me). 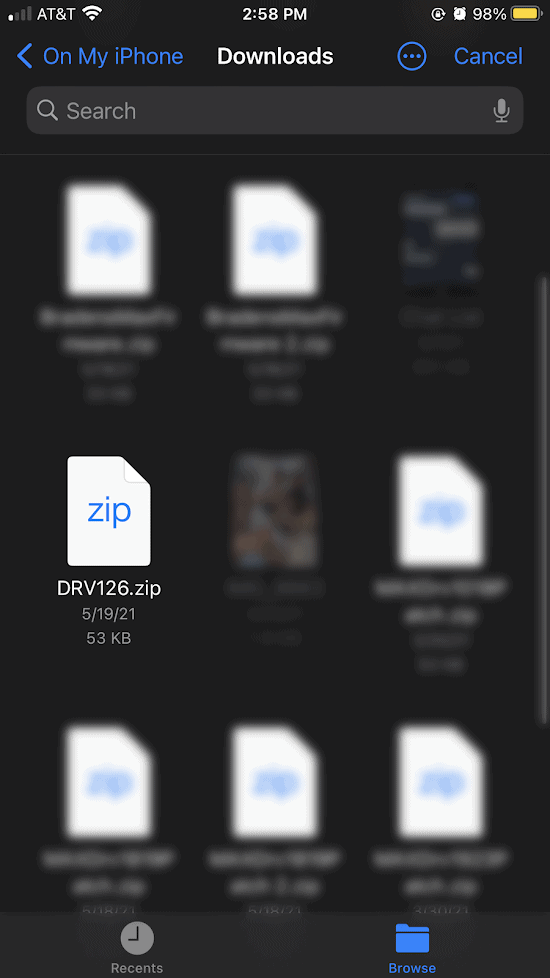 My options for firmware. 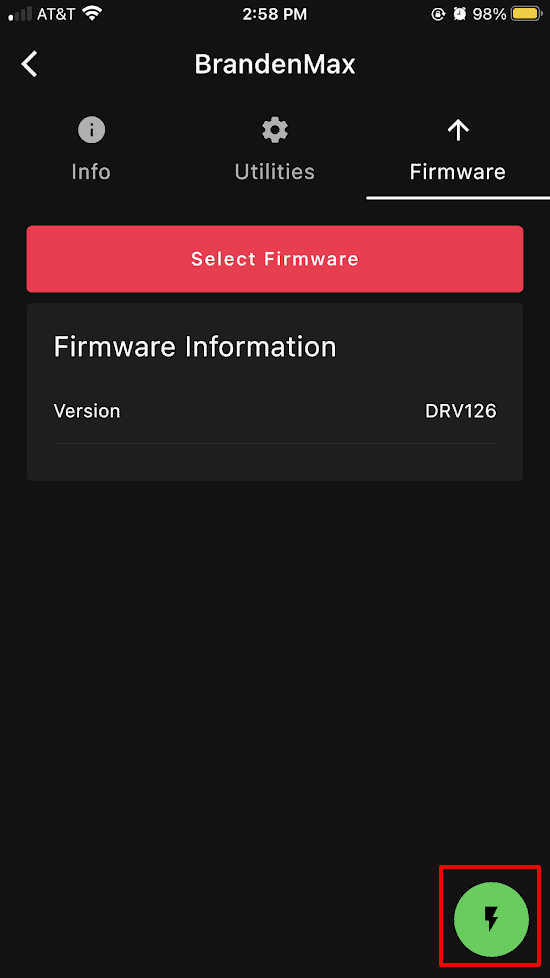 The firmware ready to flash.

It will take a few seconds to begin but should start climbing in percentage until it reaches 100%.

Click “Reboot Scooter” when prompted and you should have stock firmware.